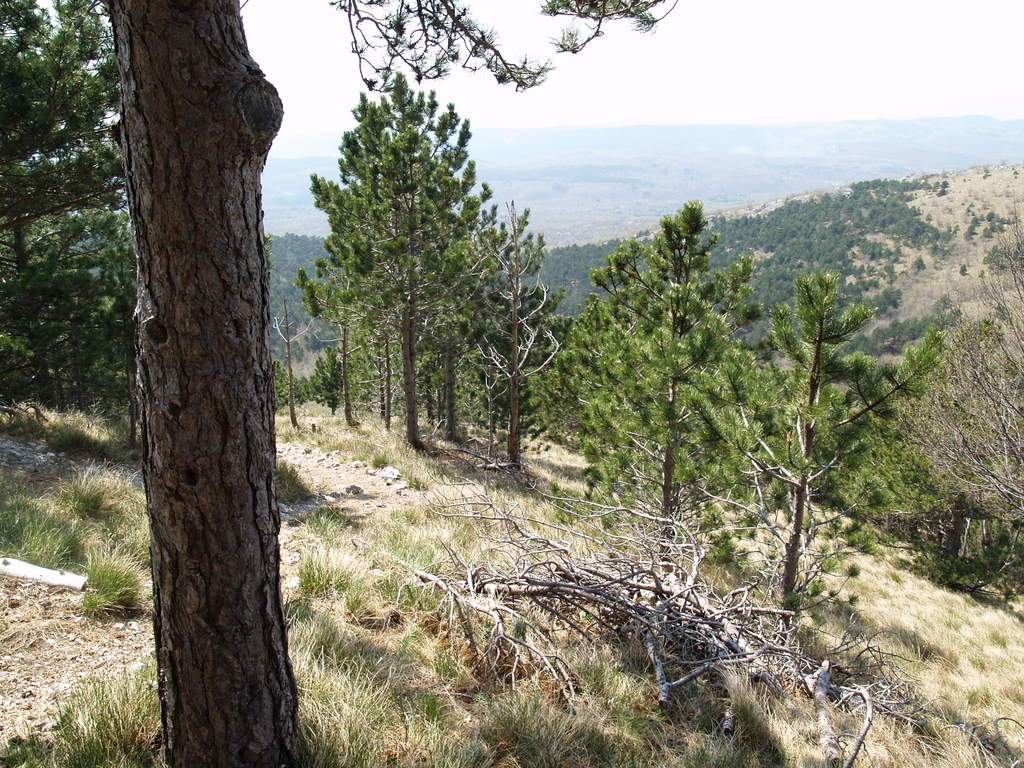 Heavy rain or the rapid melting of snow produces a number of torrential streams that swiftly flow down the slopes of the Obruč mountain cluster. Very interesting from a natural-science perspective, these torrents have carved gullies of differing width, depth and relief features, into the mountain slopes. Mudna Dol is the deepest and most picturesque gully and, because of its vertical cliffs, also the most attractive to adventure-seekers. Another interesting one is Borovica, a gully of Borovišćica stream. The gully is quite wide in comparison with others in the Obruč mountain cluster (Photo 1).

PHOTO 1. BOROVICA GULLY – ON THE WEST SLOPES, THERE IS A FIRE SITE AND THE REMAINING NATIVE BLACK PINE FOREST THAT WAS SPARED BY THE FIRE (PHOTO BY M. RANDIĆ).

Borovica gully, named so after the pine tree (pine = bor, in Croatian; a phytonym!), is well-known in terms of natural science because of the native black pine (Pinus nigra) forest covering its west slopes. The locals call this forest “Borji”. Botanists believe this to be the only black pine forest in the broader environs of Rijeka and the Obruč mountain cluster not to have been planted by people, while all others are in fact planted forests (Photo 3). Sadly, almost two thirds of the native black pine forest in Borovica gully was destroyed in a large forest fire in 2003. Today, the forest is recovering very slowly; however, certain species of deciduous trees that have sprouted on the fire site seem to be outcompeting the black pine saplings. The question is, which of these species will prevail? The black pine or the broadleaves? 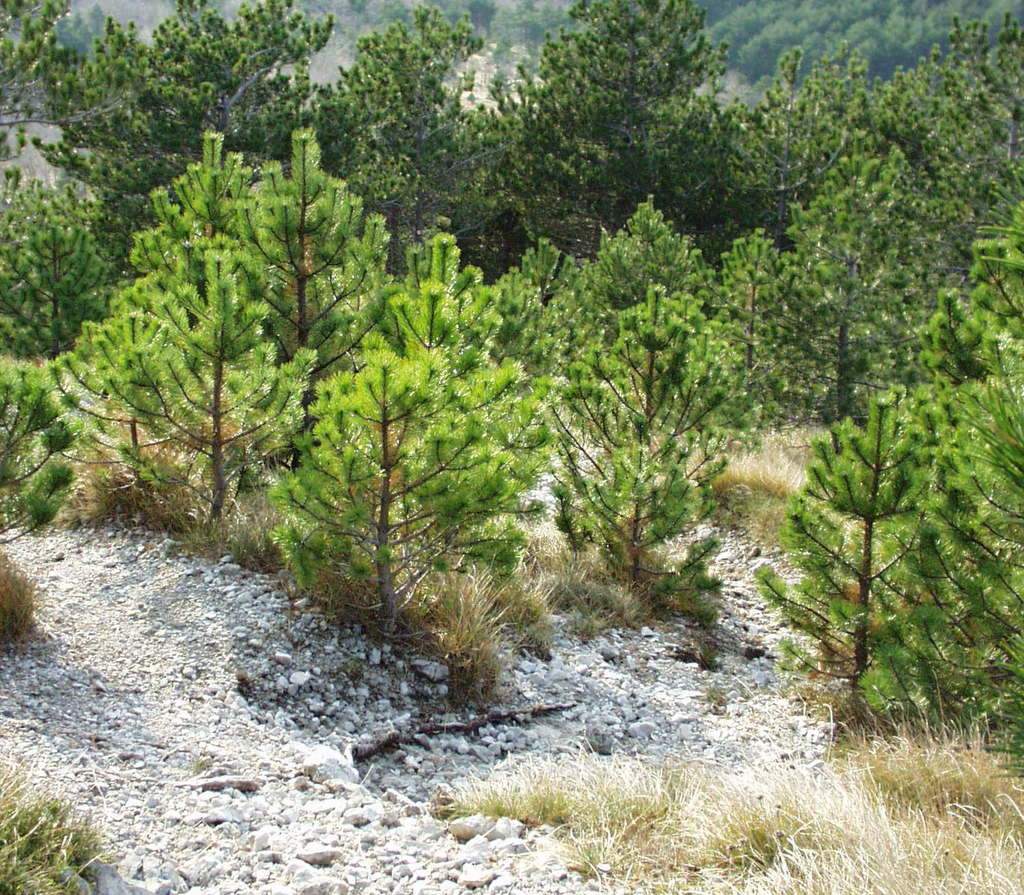 PHOTO 2. BLACK PINE SAPLINGS ON THE SLOPES OF BOROVICA GULLY. THE BLACK PINE IS RECOVERING WELL ON THE SHALLOW SOIL ON DOLOMITE ROCK DEBRIS. (PHOTO BY M. RANDIĆ).

Another interesting fact about Borovica gully is that the black pine grows exclusively on the steep dolomite slopes found on the west side of the gully. The black pine grows on dolomite slopes because the soil (rendzina formed on dolomite debris) is shallow and is slowly but surely being carried away as a result of  erosion by water and torrents. It is on this type of soil, in the early stage of formation, that the black pine is able to “outmatch” the ecologically more-demanding broadleaves (Photo 2). 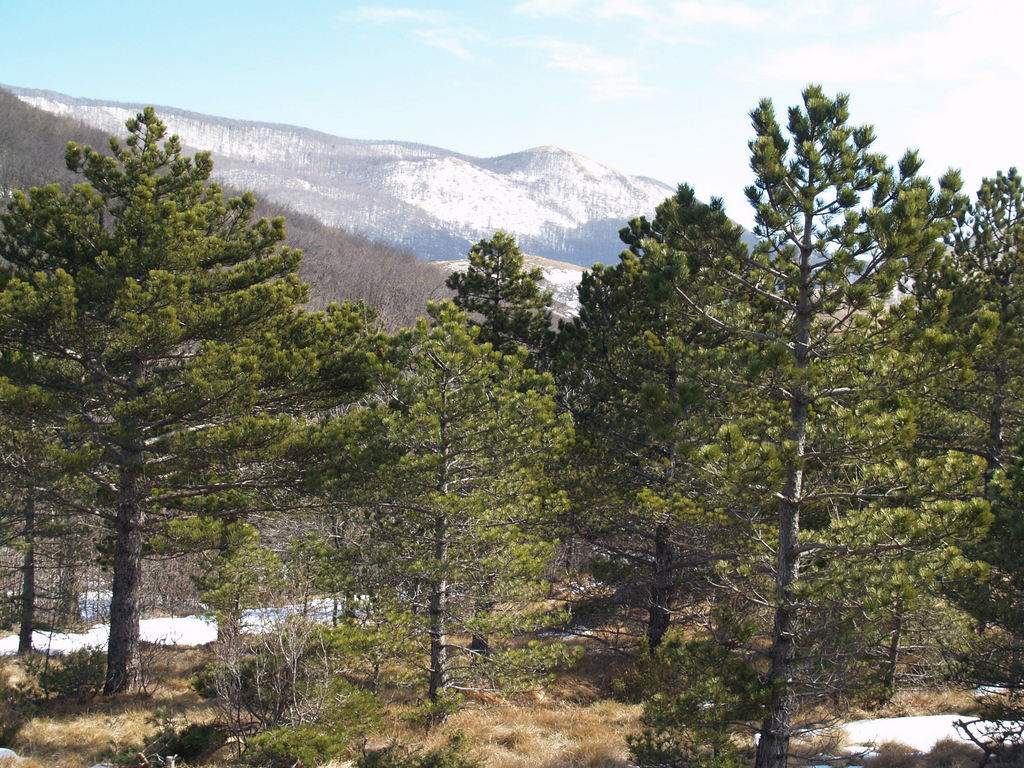 So, water, together with the geological substrate, turns out to be one of the ecological factors that enables the survival of special vegetation that cannot be found in a radius of tens of kilometres (the closest native community of black pine is in Senjska Draga) and that is considered to be the last relict of post-glacial vegetation from a time when pine forests prevailed in landscapes across the Alps and the Dinaride range. It should be noted that hop hornbeam (Ostrya carpinifolia) dominates on the opposite side of Borovica gully, where limestones make up the geological substrate. Only rarely, here and there, can we find a stunted black pine tree growing on denuded limestone rock.