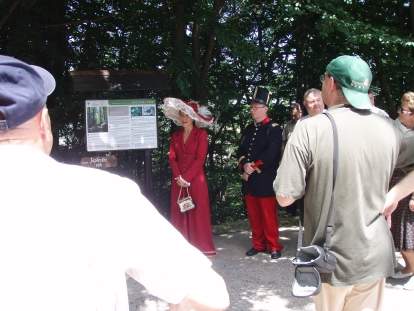 On 20 July 2007, the day before Midsummer Day and on the occasion of the Town of Delnice Day and the holiday of the Parish of St. John the Baptist, Sonja Šišić, head of the Public Institution “Priroda”, and Marijan Pleše, Mayor of Delnice, officially opened a walking
trail and uncovered two information panels in the protected Forest Park “Japlenški Vrh” overlooking Delnice.

Dressed in the historical apparel dating from first beginnings of tourism in Delnice, the “Priroda” representatives travelled to Delnice in the Buml Express, a special train for this occasion. Welcomed by the representatives of the “Tourism Committee of the District
of Delnice” of bygone days, they were then taken to the “Celebratory Meeting of the District Administration” (read Celebratory Meeting of the Town Council of Delnice). Later, under the soothing effects of the fresh mountain air of the mountain resort, a short re-enactment play was
staged near the pension “Lovački Dom” during which the walking trail was officially opened and one of the two information panels uncovered in the Forest Park.

The walking trail is marked with the usual red and white blazes (white point inside a red circle), as well as with some twenty wooden signposts that invite visitors to take a walk and see the beauty of Japlenški Vrh.