In size, the Primorje-Gorski Kotar County is the sixth largest Croatian county. It comprises 14 towns and 22 municipalities. To the north, it borders on the Republic of Slovenia; to the west, on the Istria County; to the east, on the Karlovac County and the Lika-Senj County, while to the southeast, it shares a marine boundary with the  Zadar County. It also contains the part of the offshore sea stretching to the state border located 22 kilometres southwest of the island of Susak (Figure 1). 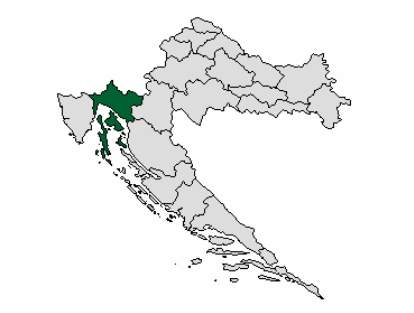 The County’s geographical position and its diverse features – the sea, the highly indented coastline and islands, and the forest-covered Gorski Kotar – have shaped the path of its economic development. In terms of physical geography, the County is made up of three physiognomically distinct parts:

The County’s 3.582 km2 of populated area (about 6.3% of total populated area of Croatia) is home to about 6.9% of Croatia’s population, giving an average population density of 84.9 inhabitants per square kilometre. The ratio of sea to land is uneven (Table 1), with the sea accounting for the largest surface area (55%).

Table 1. Share of the County’s regional units in the overall territory of Croatia

The County has a highly indented coastline, an especially favourable climate and an advantageous position in Central Europe. The coastline has a total length of 1,117.52 kilometres, of which the mainland accounts for 137.02 kilometres and the islands, for 980.50 kilometres of coastline. The County’s exceptionally favourable position in terms of transportation (the crossroad of major European land and sea routes) was a reason why, ages ago, the local population turned to shipping and other maritime activities for their livelihood.

This resulted in the development of the region and, in particular, Rijeka as the County centre, into a robust shipping centre with evolved port activities, maritime transportation, and shipbuilding and tourism activities of importance to the whole of Croatia. Gorski Kotar saw the development of forestry and the wood-processing industry

With 144,043 inhabitants, the town of Rijeka is the County’s commercial, administrative, economic and cultural centre.

The three basic subregional units – the coastal, highland and island regions – that make up the County are not homogenous in terms of geography, but rather consist of a number of smaller-sized morphogenetic, pedological, hydrographic, climate and vegetation zones.

For the most part, the coastal area is made of Mesozoic limestone with some dolomite zones, in particular on the northern coast of the Rijeka Bay around Kastav and on the island of Cres. In some places, impermeable layers of Palaeogene flysh have been deposited on the Mesozoic-Palaeogene limestone base, resulting in the alternation in the relief of limestone ridges and dolomite or flysh gorges.

From underground watercourses in the mountainous hinterland emerge numerous springs along the coastline from Opatija to Rijeka and further on to Vinodol. The waters from these springs supply the waterworks of coastal towns and villages. The capacity of these springs, however, is insufficient to meet modern water-supply requirements, especially in tourism.

The coastal area is marked by a predominantly Mediterranean climate, with the influence of the mountain climate being felt over the winter months (the bora wind, rain and snow). Because of its growing population density and because it represents the County’s most important tourism, transportation and industrial region, this area is one of the most threatened in terms of habitat protection and the conservation of biodiversity.

The subregional highland area of Gorski Kotar encompasses plateaus, fields and valleys, the high mountain regions and karst fields of Mt. Risnjak and Snježnik, as well as the valley of the Kupa River. The bedrock is composed of carbonate Mesozoic and Palaeogene complexes, together with Palaeozoic and Triassic clastic rocks.

The highest mountain peaks in the western part of Gorski Kotar are Mt. Risnjak (1529 metres) and Mt. Snježnik (1506 metres) and in its southeastern part, Mt. Bjelolasica (1534 metres) and Mt. Viševica (1428 metres). Between these peaks, stretch the lower central zones of the Dobra and Kupa River valleys. The mountains of Gorski Kotar stop the warm influence of the Adriatic Sea from penetrating into the interior, and their high altitudes impact on increasing the levels of precipitation. Hence, this region exhibits a climate that ranges from a moderately continental to a mountain climate.

The sparse population of the Gorski Kotar region is the reason for its slow economic development. The most important economic activities are the wood-processing industry and forestry. The region’s bountiful forest and water resources, its diversity of plants and wildlife, and the outstandingly good quality of its air represent a sound basis for the development of tourism activities.

The island region exhibits pronounced features of a Mediterranean climate. It consists of two groups of islands: one group to the west, comprising the islands of Cres, Lošinj and several smaller-sized islands, and the other group to the east, comprising the islands of Krk, Rab and some small, uninhabited islets. The islands of the Kvarner Bay are the largest in the Adriatic, both in size and population numbers. Economic activities characteristic to these islands include tourism and hospitality, as well as agriculture and fishing, but only to small extent. The largest populated islands in the County are the islands of Krk (406 km2) and Cres (406 km2), followed by Rab (91 km2) and Lošinj (75 km2). Permanently inhabited but substantially smaller-sized islands include Unije (17 km2), Ilovik (6 km2) and Susak (4 km2).

The islands of Cres and Lošinj are built of Cretaceous limestone and dolomites. The constant inflow of rain water in the central part of Cres Island resulted in the formation of Vransko Lake in a dolomite valley. Unlike the central and southwestern regions of the island, its northern region is poor in fertile soil and has less vegetation due to the impact of the bora wind and meteorological conditions on land.

The island of Krk comprises three regions that differ in terms of relief. In the north, there is a sparsely populated, low limestone plateau. The most populated is the island’s central part, which accounts for more than half of the island’s surface area. Because of the alternating limestone and dolomite rocks, the relief consists of gently rolling hills covered in vegetation. The southern region encompasses about a third of the island’s area, and half of this region is covered in a 350 – 400 metre high limestone plateau.

The island of Rab has the highest population density and it is the only island showing consistent population growth. Rab consists of four longitudinal zones – two of flysh, and two of limestone. The island’s many springs are the result of the interchanging layers of permeable and impermeable rocks.

Distinct differences exist in the population density and the development level of the various subregional units. A total of 14 large towns and 22 municipalities with 536 smaller towns (Table 2) are registered in the Primorje-Gorski Kotar County, with the majority of towns located in the coastal area. Town and municipality boundaries within the County are illustrated in Figure 2.

Table 2. Overview of the County’s towns and municipalities per subregional unit