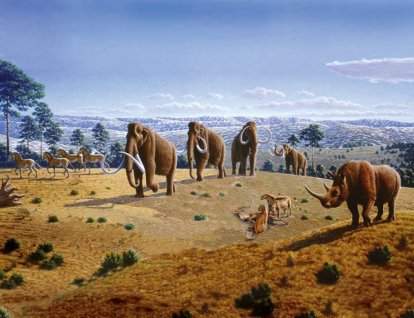 Anyone fascinated by the long-gone world of ancient animals
should not miss the exciting exhibition, “The Lion’s Pit”, that
has opened at the Museum of Crikvenica. These ancient animals roamed our
region towards the end of the Ice Age, when the region’s climate and landscape,
which today belong to the category of the sub-Mediterranean coastland,
were completely different. The fauna and flora also differed considerably
from today’s: there were many large mammals, and probably different types
of habitats such as expansive grasslands and/or woodlands that later vanished.
The unique paleontological treasures displayed in the exhibition bear
witness to this. The remains of numerous ice-age animals from the time
of the Upper Pleistocene – the end of the long Ice Age – were deposited
among the sediments in Vrtare Male Pit thanks to the configuration of
this karst pit. The pit was like a natural trap; any animal that fell
into the pit could not get out again. Cave lions, steppe bisons, elephants,
forest rhinoceros and many other intriguing animals of that time found
their end in the pit. Based on the remains of their bones, today’s researchers
seek to piece together the story of those ancient times.