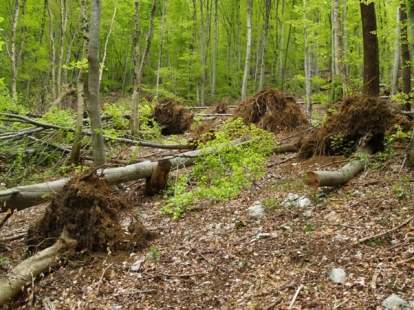 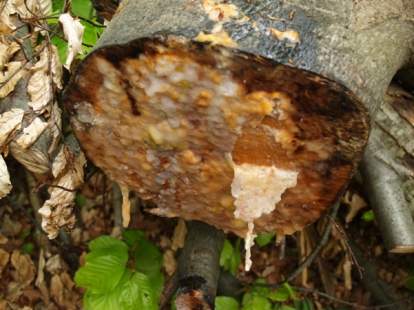 Photo 1. An accumulation of microorganisms on a sawn beech trunk leaking
sap (Photo by Marko, Ana and Nina Randić)

Last autumn, powerful bora winds toppled a group of beech
trees at the foot of Mt Učka in the forest area near the village of Trebišća
(see:http://www.ju-priroda.hr/zanimljivosti.asp?id=2zanimljivosti/gea/3-olujno-nevrijeme.html
). The trees fell across a path making it necessary for Učka Nature Park
rangers to cut the trees with a motor saw to allow hikers and visitors
to use the path. Although the bora wind uprooted the trees, a part of
their roots remained in the ground and this spring plant sap began circulating
in some of the trees which even managed to produce leaves, despite being
toppled. The cross-section of one of the larger trees was oozing copious
amounts of sap.

A variety of insects, such as butterflies, flies and
beetles, are often attracted to the sweet sap oozing from wounds on tree
trunks. We can usually see this in early spring. The insects that alight
on the sap carry various kinds of microorganisms – bacteria and fungi
– on their legs and bodies, which are transferred onto the sap.

In our case, a variety of bacteria and fungi had colonized
the sap-soaked cross-section of a beech tree, forming a jelly-like, amorphous
layer, half a centimetre to one centimetre thick, over the entire cross-section.
The mass was a whitish-rosy-brownish colour with streaks of orange and
yellow. This unusual phenomenon, encountered for the first time, reminded
us of the kombucha “fungus” that many people cultivate at home
on sugared tea and consider to be very medicinal.

The medicinal properties of the kombucha “fungus”
are being tested by scientific methods today and, among other things,
the types of microorganisms that make up kombucha have been identified.
These are primarily various kinds of bacteria and yeast that live in close
symbiotic relationships and make it impossible for other type of bacteria
and fungi to grow that might contaminate the kombucha “fungus”.
The kombucha fungus is not actually a fungus; it is made up of different
species of acetic acid bacteria, such as Acetobacter xylinum, A. xylinoides,
Bacterium gluconicum, Acetobacter aceti and A. pasteurianus, while some
of the more important yeasts identified are Schizosaccharomyces pombe,
Sacharomycodes ludwigii, Kloeckera apiculata, Saccharomyces cerevisie,
Zygosaccharomyces bailii, Brettanomyces bruxellensis, B. lambicus, B.
crustersii and other microorganisms (Dufresne and Farnworth, 2000).

These microorganisms live in symbiotic relations and
carry out the complex processes involved in fermenting sugared tea. The
acetic acid bacteria Acetobacter xylinum has been shown to be especially
important in this community of microorganisms because of its ability to
produce a floating matrix of cellulose in which highly complex symbiotic
relations can be set up among the other species of microorganisms of the
“tea fungus”.

We can assume that the thick, slimy, jelly-like layer,
growing on the beech trunk leaking sap, probably has properties similar
to those of the “tea fungus”. Perhaps it is made up of the same
or similar (related) species of yeast and bacteria. We are not aware,
however, whether any researchers have studied this intriguing phenomenon
in nature.

Photo 2. A part of the forest above Trebišća at the foot of Mt Učka where
strong bora winds have uprooted and toppled beech trees (Photo by Marko,
Nina and Ana Randić).