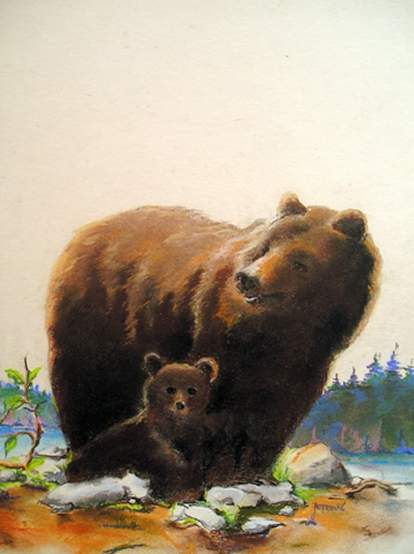 BEAR SIGHTED! BIOLOGISTS CAUGHT BY SURPRISE!!!
A formal report about the “incident”

During one of his routine rounds in the forest, ranger
M.M. (32) of PI Priroda received an unusual text message from his colleagues
in the field. Namely, earlier that day he had left a group of biologists
at the foot of Jelenčić Hill. The plan was to follow the hiking trail
up to the top of the hill and then back down again. As agreed, the ranger
was waiting for his colleagues and doing some bird-watching, when he received
the text message: Bear!

M.M., who during his rounds in the forest often encounters
bears, was not unnecessarily upset by the message he received because
he was unaware of the drama that was unfolding on the hill. What really
happened can be seen in the eye-witness reports of the biologists.

The biologists were admiring the beautiful specimens
of orchids in the field when they heard a rumbling sound on the neighbouring
slope. When M.R. heard the gasps of his colleagues, he first though they
had seen a deer. On the contrary, they had just realized a bear was running
towards them! I.R. (26) told us, “My first thought was, it’s a bear!
A live bear! I was overjoyed, naturally! I grabbed my camera right away!”
While S.S. was texting the ranger, M.R. remained calm and reacted in the
appropriate way considering the circumstances. “It seemed to me that
the bear did not have any friendly intentions considering the speed at
which it was running towards us. It then stopped at a certain distance.
It was obvious that it had no intention of running away. I also thought
my colleagues reactions were a bit too carefree for the situation, so
I advised that we all slowly move away, taking no more pictures.”
The biologists started to back away slowly, never turning their backs
to the bear and speaking very loudly. S.S. (26) said, “I have to
admit that we were a bit worried. We were just waiting for cubs to jump
out of nowhere…”

Fortunately, this was the correct approach to the situation,
and both the biologists and the bear were unharmed. How do we avoid encountering
a bear, and how should we react if an encounter does take place???