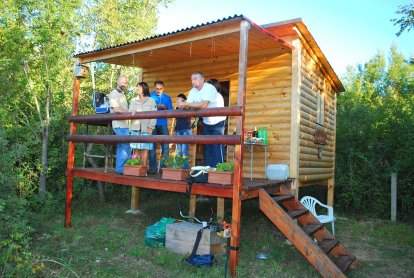 For the third year running, the autumn Ornithological
Camp has been set up at Jezero, near Njivice, at which ornithologists
of the Association “Jezero”, the external associates of PI “Priroda”
and authorised bird-ringers systematically study and ring birds. Recently,
an ornithological ringing station has been added to the camp. The station
is a small, wooden cabin on the shore of Jezero that serves as a field
base for ornithologists. Here, ornithologists, as well as other nature
and bird lovers, can find shelter and lodging during field research. The
ringing station has already become a vital point for transferring new
knowledge to many schoolchildren, as well as to numerous bird lovers,
who visit Jezero to learn about the life and habits of birds from natural
scientists. Children are especially enthralled to hear about long and
strenuous bird migrations. During bird studying and ringing at Jezero
over the past years, many valuable findings have been made of ringed birds
that have arrived at Jezero from far-away parts of the world. Some of
the birds ringed at Jezero have also been caught in far-off countries.
During this year’s autumn camp, more than 6,500 birds have been ringed
and registered over the past several weeks. Some very interesting findings
have been made, such as a reed warbler that was caught and ringed at Jezero,
only to be caught again just a few days later in distant France! It is
therefore no wonder that the Croatian Society for Bird and Nature Protection
(CSBNP) chose Jezero, out of a number of locations across Croatia, to
organize activities marking European Birdwatch, a bird-counting event
held annually on October 1 and 2. Other locations and activities included:

According to CSBNP provisions, to participate in bird
counting, nature lovers simply needed to contact the Birdwatch coordinator
for Croatia who would then direct them to the nearest CSBNP supervisor
responsible for organizing bird and nature tours. The CSBNP supervisors
for the Jezero camp were the ornithologists of the Association “Jezero”.
Tours consisted of hiking through bird habitats (Jezero, fishponds, river
mouths, forests and/or fields), identifying species, and learning about
their lives, songs and other facts.

Six hundred metres of bird-catching nets were set up
at Jezero this Saturday and Sunday. Bird counters were able to learn about
the methods of field research and bird ringing, as well as how to identify
birds, and how to take and record scientific field data. The primary aim
was to demonstrate to the public what the Bird-ringing Camp has been systematically
doing over the past few years, and why its activities are so important.
At that time, a data logger was set up for measuring temperatures, humidity
and other environmental indicators to help improve our knowledge of the
link between bird life and a variety of environmental factors at the Jezero
micro location. PI “Priroda” will report regularly with the
leading results from the work of the Jezero Ornithological Camp. 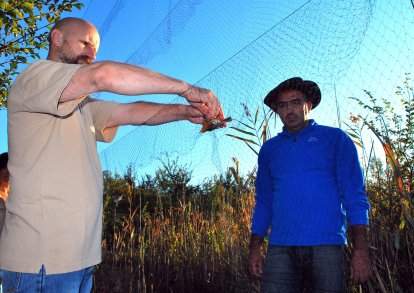 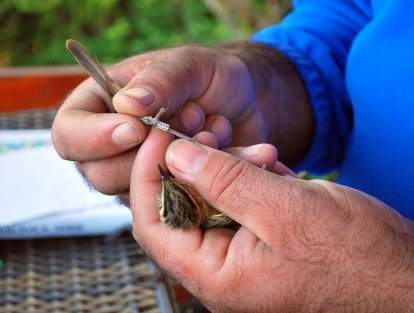 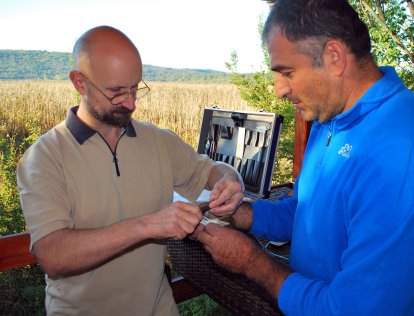