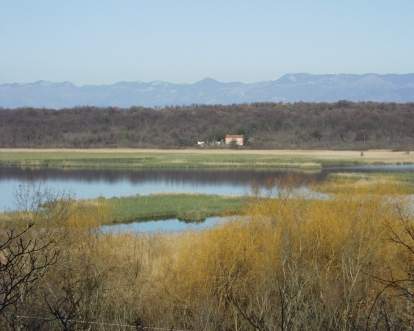 ORNITHOLOGICAL BIRD-RINGING CAMP AT JEZERO NEAR NJIVICE IN 2009

On the Kvarner islands, there are several fresh-water
and saline wetland areas of exceptional importance to the spring and fall
migration of birds. Here birds can find shelter and sufficient food prior
to setting off on the long journey that awaits them. There are two such
fresh-water, marshy areas on Krk Island: Jezero near Njivice and Ponikve.
Both of these locations have long been known as a kind of “little
Eden” for birds. Together with the saline coastal marshy area in
the Soline Cove, these locations have been inserted into spatial plans
as important areas planned for protection. The Public Institution “Priroda”
considered that it would be interesting if the birds were monitored, over
a period of several years, during their stay in these areas, and this
led to the foundation of the “Jezero Bird-ringing Camp” in 2008.
This year is the Camp’s second season, with bird-ringing prior to fall
migration lasting from 31 July to 15 October. Over 65 days, a total of
11,534 bird specimens belonging to 51 species were ringed. Four bird-ringers
authorised by the Institute for Ornithology of HAZU – Milorad Malatestinić,
Boris Ende, Kristijan Mandić and Andrej Radalj – headed the bird-ringing
scheme.

In the camp, the birds were caught using special nets
stretched across the reed zone where the birds prefer to stay and hide.
The birds caught in the nets were carefully removed and a ring with special
markings was assigned to each bird. Placed on the bird’s leg using ringing
pliers, the ring does not hinder the bird’s movements or flight. The data
on the rings makes it possible to identify the bird anywhere in the world
should it be caught again. Similar to last year, the most birds caught
and ringed were swallows – as many as 7,028 specimens, mostly during in
the evening hours as they flocked in great numbers in the sky above Jezero.
It was an impressive and unforgettable sight for everyone there. Research
concerning ringed swallows has shown that, following short periods of
wandering and prior to migration, these birds tend to briefly flock and
stay in favourable locations (Jezero being one such important location)
before migrating south to Sub-Sahara Africa for the winter.

The great number of birds concentrated in a single area
attracts birds of prey. Such a bird is the Hobby, which aroused large
interest in the camp. This year for the first time ever, a specimen was
caught and ringed at the Jezero camp.

It is interesting to note that, in addition to swallows,
other bird species were also caught in unusually large numbers. For example,
as many as 1,006 blackcaps were ringed. This species has an elastic migratory
strategy; one part of the Eastern European population migrates to Sub-Sahara
Africa, while the rest remain in various parts of the Mediterranean. The
second most numerous species to be ringed was the Reed Warbler (989 specimens).
The dense reeds at Jezero hide a sufficient quantity of insects on which
these birds feed by hopping from one reed to another. A total of 822 specimens
of the Sedge Warbler were also ringed, one of which carried a ring from
Sweden. The Garden Warbler boasted a total of 694 ringed specimens. All
through August, the ornithologists had the opportunity of observing specimens
of this species feeding on many types of berries and, in many cases, the
garden warblers retrieved from the nets had soiled feathers. The song
of the Robin could be heard only during the very early morning hours.
A total of 234 robins were ringed, together with 145 specimens of the
Great Reed Warbler, among which there were two findings from Germany and
the Czech Republic.

Some bird species, although numerous in the Jezero region,
were caught in very small numbers or not at all, due to their specific
habits. In such cases, observations made with the naked eye or with the
help of binoculars were extremely valuable. Sightings that can be singled
out are those of two black storks, one white-tailed sea-eagle, a flock
of some 50 cranes and one osprey.

The findings of birds ringed at the Jezero camp up-to-date
show that birds fly to this region from various European countries: Sweden,
Hungary, Italy, Germany, Slovenia and the Czech Republic. These findings
help to push aside the shrouds of secrets surrounding the previously mysterious
and unexplained migratory paths and habits of birds. We can conclude that
the 2009 Bird-ringing Camp has been an exceptional success and it has
underscored the immense importance of the Jezero area as a place of flocking,
rest and feeding for numerous migratory birds.

The next time you are driving along the island highway
not far from Njivice and you catch a glimpse of the water area of Jezero
and the broad zone of reeds that surrounds it, remember what you have
read here about the birds caught, ringed or observed during the ornithological
camp. Despite being a relatively small natural oasis wedged in the north-western
part of Krk Island that is “urbanised, industrialised and teeming
with infrastructure”, this area is of crucial importance for the
survival of birds, not only of the island but also of the extended environment.
We hope that, within this context, the Bird-ringing Camp will also play
an educational role and help more people to learn about the necessity
of conserving and protecting this location indispensable to the Primorsko-Goranska
County and to Croatia.