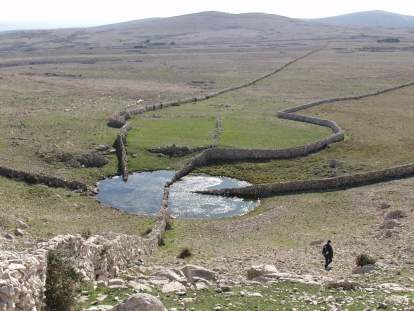 TRAIL MARKINGS PLACED ALONG THE TRAIL TO DIVISKA POND

One of the most interesting landscape features of the island of Krk is its barren, rocky and deforested southern part located between the towns of Treskavac and Baška. This area is a plateau that stretches along both sides of the Bašćanska Hollow. The northeastern edge of the
plateau, from Cape Glavina to Mala Luka, is made up of steep sea cliffs. It is here that an ornithological reserve was founded in 1969.

Across the plateau, we can find numerous sheep corrals made of dry-stone walls. These corrals called mrgare are true gems of folk architectural heritage. These corrals are used for holding flocks of sheep, while shepherds carry out the traditional activities linked to sheep farming
– counting, marking, sheering and milking the sheep. Around the stone corrals on the rocky open country, which tourists have come to call “the moonscape”, the sheep graze for most of the year, moving freely across the landscape.

The ponds that help to sustain life in these waterless regions are truly a vital element of this landscape. The largest and best known is the Diviska pond, without a doubt the most beautiful and picturesque pond of the entire island of Krk and, possibly, of all the Kvarner islands.
In April 2007, under the organisation of the Public Institution “Priroda” trail markings were placed along the trail leading to the pond. The pond is fascinating in the way it harmoniously blends into the barren landscape in which it represents a miracle, an oasis of life. Especially
scenic are the dry-stone walls, old boundary markings that divide the pond into several parts and from which they spread star-like, almost endlessly across the landscape.

The pond can be reached from the town of Baška by taking the existing trail to Hlam Peak, which passes through the “Moon Mountains”. At the Kalić Pond, from the existing trail we turn onto the newly marked trail that leads to Diviska Pond (the trail is marked with cairns,
small piles of rocks).