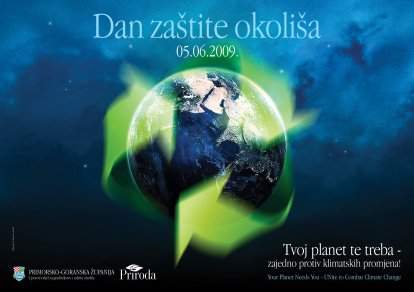 Established by the United Nations as long ago as 1972,
World Environment Day is traditionally celebrated around the world on
June 5. This year’s World Environment Day slogan is “Your Planet
Needs You – Unite to Combat Climate Change”, and it is a sequel to
last year’s theme dealing with efforts in reducing the emission of carbon
dioxide (CO2) into the atmosphere. CO2 is a greenhouse gas that has the
greatest effect on bringing about climate change on our planet. In addition
to causing a range of problems in the environment and having a direct
and often adverse impact on human life, climate change also has a negative
effect on our landscapes and biological diversity. To draw the attention
of the public to the potential problems resulting from climate change,
we have designed a poster and placed an advertisement in the local daily
newspaper, the Novi List. Also, a part of the events planned for the celebration
of the International Day for Biological Diversity have been moved forward
to coincide with World Environment Day (the official opening of the exhibition
of Zlatko Pohobratsky, as well as the instructive trail on Japlenški Vrh;
a hike along the marked trail connecting two Forest Parks of Gorski Kotar
and the Lokvarka Cave).

(for more on the potential effect of climate change on
the landscapes and biodiversity in the Primorsko-Goranska County, see
the column “Did
You Know?” at Priroda’s Web site)