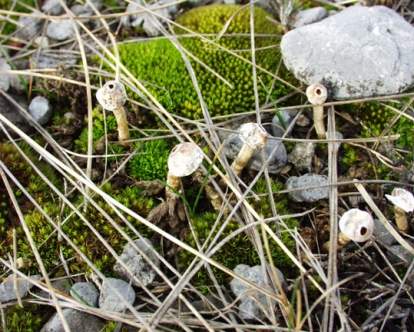 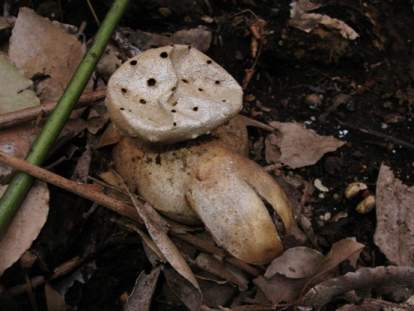 Photo 1. A mycological scoop! Possibly the first finding ever of a pepperpot
earthstar (Myriostoma coliforme) in Rijeka (in Mlaka Park!), as well as
in Primorsko-Goranska County. (Photo taken by Ruben Knežević, Mycological
Association “Ožujka” on 2 February 2013 in Mlaka Park)

The term neglected land often has negative connotations.
People regularly use neglected land for dumping various types of waste,
and such areas are also associated with other kinds of undesired, or even
deviant, behaviour. Nevertheless, some of these neglected areas possess
a remarkable ecology that provides a haven to rare species of birds, animals
and fungi. In this report, we shall take a look at the world of fungi.

Interesting examples of rare fungi species growing on
neglected land are the relatively rare species of the Morchellaceae family.
These mushrooms can be found even in towns, in a great variety of neglected
sites: among heaps of garbage, on old cardboard boxes, rubble, old rags,
etc. Obviously, this has stirred up quite some interest among mushroom
experts who particularly appreciate morels. Mr Ervin Raguzin, a member
of the Rijeka Mycological Association “Ožujka” and a regular
and valued associate of PI “Priroda” (in all matters concerning
fungi!), wrote an interesting article in Gljivarski glasnik (No. 9/1998),
the association’s publication, concerning morels growing in the most peculiar
town land sites.

On 14 February 2013, Mr Ruben Knežević, another member
of the Association, contacted us about the discovery of an unusual and
“unknown” species of puffball-earthstar in Mlaka Park. We immediately
realized that it was a pepperpot earthstar (Myriostoma coliforme), a rare
mushroom characterized by the small holes that perforate its fruit body
and through which spares are ejected. Mr Knežević found the mushroom alongside
a footpath on a somewhat neglected area of the park. The mushroom’s fruit
body managed to develop thanks to the fact that its micro habitat had
not been raked for quite some time, thus enabling the creation of specific
(micro) environmental conditions. According to the Red Book of Croatian
Fungi, the pepperpot earthstar has been recorded at three locations in
Croatia: on Brač Island and in the environs of Dubrovnik. The Encyclopaedia
of Fungi by Dr Romano Božac lists one more location on Samoborska Gora.
In Croatia, this mushroom falls into the vulnerable species (VU) category.
This is probably the first documented finding of the pepperpot earthstar
in the town of Rijeka and in the PGC.

Thanks to the habitat mapping project carried out in
the canyon of Rječina River, we were able to ascertain that neglected
rocks site, such as neglected drystone walls, are exceptional micro habitats
and a true “Eden” for some types of rare fungus species (although
the average mushroom gatherer would probably never think of looking for
mushrooms in such places!). In addition to a carpet of moss, some old,
rusty pots, and heaps of small or large rocks (that generations of people
have been throwing onto these drystone walls), the fruit bodies of rare
fungus species can also be found during the damper part of the year. These
include several species of stalked puffballs (Tulostoma sp. div., some
of which are also listed in the Red Book as threatened and rare species),
and various other puffballs (Gasteromycetes), as well as many species
of smaller gill fungi, which even an experienced mycologist would find
hard to categorize. As part of the fungi-mapping project in Rječina Canyon,
we intend to report more on this type of habitat and the mushrooms growing
in it (see: http://www.ju-priroda.hr/en-novosti.asp?id=novosti-en/111-rjecina-kartiranje.html). 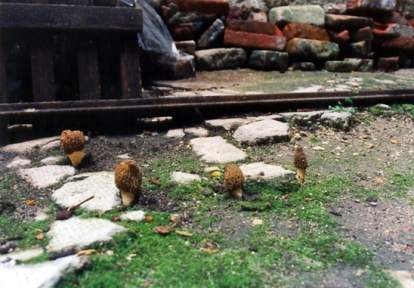 Photo 3. Morels growing on a neglected area in the centre of Rijeka, not
far from Riječki Neboder (the Rijeka Skyscraper) (Photo by Ervin Raguzin,
Mycological Association “Ožujka”)