In the morning hours of 1 July 2007, an 81-year-old, experienced mountaineer and member of the Mountain-climbing Society slipped on the walking trail and slid down a 20-metre, steep cliff in the protected “Vražji Prolaz” Reserve. The Mountain Rescue Service (MRS) of
Delnice responded immediately. Given that the accident occurred in a protected area, a ranger of the Public Institution “Priroda” also participated in the rescue operation.

Shortly after the accident was reported, the MRS team of Delnice arrived at the scene of the accident, together with an MRS doctor from Rijeka and Matko Škalamera, ranger of the Public Institution “Priroda” and member of the Rijeka MRS. At the time of the accident, the
team was on duty call at a nearby protected area – the Forest Park “Japlenški Vrh” where a mountain-bike championship was taking place. This enabled them to arrive at the scene in the shortest possible time.

The rescuers lowered themselves on ropes down to the injured mountain climber, immobilised him and pulled him out on a stretcher. The injured man received first aid and was then transferred to the Sušak Clinical Hospital Centre. This accident indicates that however easy some
of the walking trails and paths in Gorski Kotar and elsewhere in the protected areas of the County of Primorje and Gorski Kotar may seem, they call for a hiker’s full attention and watchfulness. Our lesson from this accident is that we must immediately assess and seek to eliminate all the potential
hazards within the protected areas that the Public Institution “Priroda” manages. 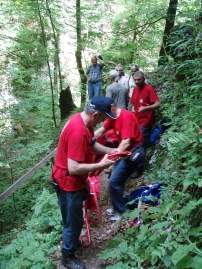