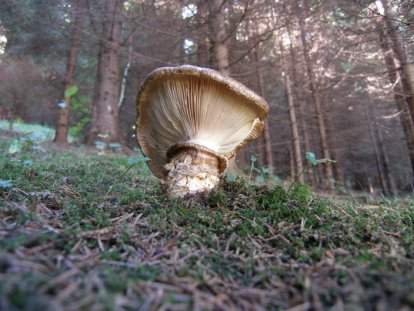 According to the Red Book of Croatian Fungi, the imperial
cap mushroom (Catathelasma imperiale /Fr.: Quél./ Singer) belongs to a
group of rare or very rare European species, while according to the IUCN
categories of threatened species, it falls into the vulnerable species
(VU) category, a category of species with a high risk of extinction in
natural habitats due to very small or limited populations. The Red Book
of Croatian Fungi lists only two sites for the imperial cap mushroom,
both in Gorski Kotar. Because it is a mycorrhizal fungus associated mainly
with spruce and fir trees, the imperial cap mushroom prefers boreal-type
coniferous forests

The imperial cap mushroom in Trstenik Mire was discovered
by Mr Predrag Grubišić, who is also the president of the Mycological Association
“Ožujka”. As the Public Institution “Priroda” and
the Mycological Association enjoy a high level of cooperation, Mr Grubišić
immediately contacted “Priroda” after learning about its plans
to eliminate the young spruce trees that present a threat to the vegetation
of the mire. He reported his discovery of a rare species of fungus and
its new site at Trstenik Mire.

On 14 October 2010, Mr Grubišić led us to the new site
of the imperial cap mushroom in the young spruce community on the mire’s
outer margin. Using GPS devices, we delineated the site’s coordinates.
As a habitat conservation measure, we intend to slightly modify our initial
plan of eliminating the spruce trees that are overgrowing the mire. To
this effect, the immediate area of the site of the imperial cap mushroom
will remain untouched. Some spruce trees will also be left in the mire
itself to help support mushroom growth and to contribute to the appearance
of the landscape. We have informed the Klana Forest Area Office of the
new site of the imperial cap mushroom. The Public Institution “Priroda”,
the Natural History Museum of Rijeka and the Klana Forest Area Office
are partners in a multi-annual project to monitor and revitalise the bog
habitat. 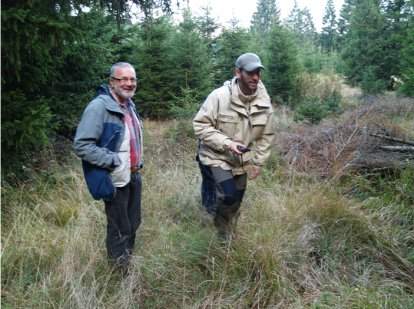