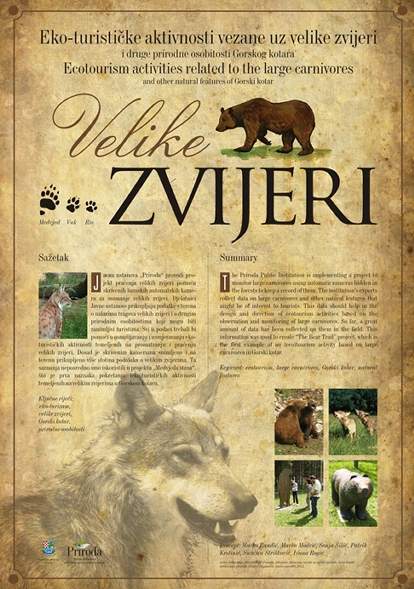 The First Croatian Congress on Rural Tourism was held
on Hvar Island in October 2007, and the Second Croatian Congress with
International Participation, on Mali Lošinj Island in May 2010. This year,
from 23 to 26 June, Osijek was host to numerous domestic and foreign participants
of the Third International Congress on Rural Tourism at which PI Priroda
presented a poster entitled “Large Carnivores”.

The importance of rural tourism is seen foremost in the
interaction that takes place between tourism services and agricultural
production, the production of traditional products, and the presentation
of traditions and traditional gastronomy; in other words, in the use of
existing resources. Considering that rural tourism is based on sustainable
development, the cooperation of actors in many areas – among which environmental
protection stands out – is vital in the strategic planning of rural tourism.
The key objective of environmental protection projects that PI Priroda
carries out is to ensure they are implemented in tourism activities. One
such project, which brings together environmental and tourism activities,
deals with the large carnivores and other specific natural features of
Gorski Kotar. The project was presented at the congress with a poster.
Croatia is one of the rare European countries that can boast of all three
large European carnivores – the wolf, the lynx and the bear – living in
its territory. This fact alone could serve as a basis for developing animal-watching
and tracking tourism. The conclusions of the Third International Congress
on Rural Tourism underline the need for greater efforts in promoting and
developing special forms of rural tourism, that is, special-interest tourism.

PI Priroda has applied the data gathered in its large-carnivore
monitoring project, in which hidden cameras are used, to carry out another
project entitled “The Way of the Bear”. The latter is the first
indication of launching eco-tourism activities in Gorski Kotar based on
large carnivores.