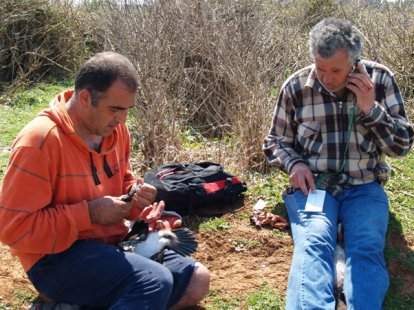 A bird-ringing scheme was carried out on Oruda Island
in the Cres-Lošinj archipelago on 14 April 2008. The birds ringed belonged
to a colony of Mediterranean shags (Phalacrocorax aristotelis ssp. desmarestii).
Andrej Radalj and Boris Ende of Rijeka, authorised bird-ringers and associates
of the HAZU Institute for Ornithology and Public Institution Priroda,
headed the bird-ringing scheme. Both men have great experience in ringing
sea birds on small islands of Kvarner Bay and elsewhere in the Adriatic.
Some 40 chicks and adult Mediterranean shags were ringed on their nesting
grounds. The GPS positions of nests were taken, and a record was made
of the specific flora of the nesting grounds. Four major types of vegetation
were identified in which nests were made. The basic features of the vegetation
include densely intertwined (prickly!) shrubs and vines (Smilax-Rubus-Vitex),
nitrophilic araceae/friar’s cowl (Arum italicum-Arisarum vulgare), grasses
(Brachypodium) and a few species of ruderal plants. Only in one case was
a shag’s nest found in the robust clumps of spiny rush. Priroda employees
had the opportunity to learn about the natural distinctive features of
Oruda Island, which is part of the National Ecological Network because
of its communities of wild olive trees (Olea europaea ssp. oleaster) and
sea-bird breeding grounds. We take this opportunity to extend our thanks
to the Port Authority of Lošinj without whose assistance and logistics
support the bird-ringing scheme would not have been possible. 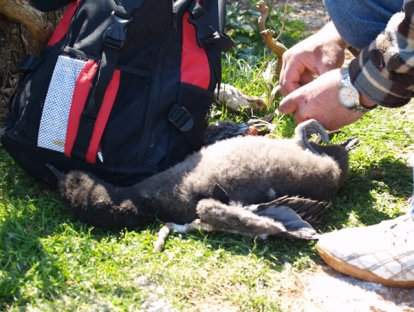 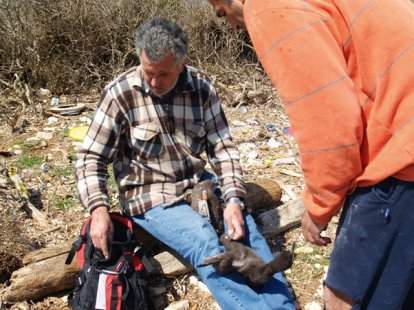