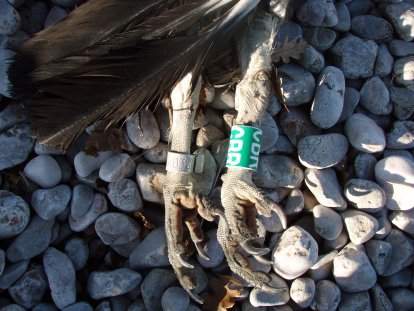 On 2 February 2010, we received a report from Mr. Goran
Sušić, Ph.D., head of the Griffon Vulture Rescue Centre of the Eco Centre
“Caput Insulae” at Beli on Cres Island, informing us of the
possibility that a vulture was dead in the Supovica Cove area near Risika
on Krk Island. The vulture was ringed and carried a GPS tracking device.
Members of the Ranger Service of the Public Institution “Priroda”
(Marinko Cindrić and Lovro Gudac), together with Mr. Andreas Jäger, associate/volunteer
at the Eco Centre “Caput Insulae” and top-notch nature photographer,
set out to the area and discovered the remains of the dead vulture. Named
Selena, the vulture was five years old and, unfortunately, did not make
it to her first nesting season. Selena’s life is a somewhat unusual and
sad story. Ringed in 2005 on Plavnik Island as a member of the Kvarner
vulture population, she was shot by hunters near Bergamo in Italy the
same year and taken to the Vulture Rescue Centre in Cornina, where she
was received by Dr. Fulvio Genero, the head of the griffon vulture reintroduction
project in the Furlania-Julian region. After being fitted with a GPS tracking
device to monitor her movement, Selena was released back into nature in
2009. January 2010 found Selena in the Ornithological Reserve on Krk Island,
where it seemed that she was finally reintegrated with the Kvarner population
from which she had originated. While the reason Selena died is not known
at present, efforts will be made to establish the cause of death.