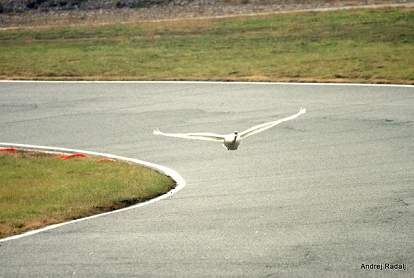 SWANS RINGED ON THE RJEČINA RIVER ARE NESTING AT SEČOVLJE SALINA

Our news report of 9 March 2010 was
about the ringing of two mute swans (Cygnus olor), out of four that were
found wintering on the Rječina River near the Hotel Kontinental. One female
and one male were fitted with neck-collars numbered 83PA and 85PA, respectively.
In our report, we outlined the advantages and importance of more recent
(and less stressful) methods of ringing long-necked birds using wide,
plastic neck-collars to help monitor their lives, movements (wanderings
and migration), behaviour, life span, the size of their territory and
other interesting facts. Ringing efforts soon brought results. Information
about the ringed female was first received from the Isonzo-Staranzano-Gorizia
region of Italy. “Our” pair of neck-collared swans was then
sighted in the Fontinigge region at Sečovlje Salina Nature Park(www.kpss.si/novice/zanimiva-opazovanja/labodje-jezero-s-hrvaskimi-baletniki).
This year, it has been confirmed that the female swan marked 83PA is nesting
in the mouth of Dragonja River (www.kpss.si/si/novice/naravovarstveni-monitoring/labod-grbec–nov-gezdilec-v-kpss)Sečovlje
Salina is a protected area of Slovenia and has the status of nature park.