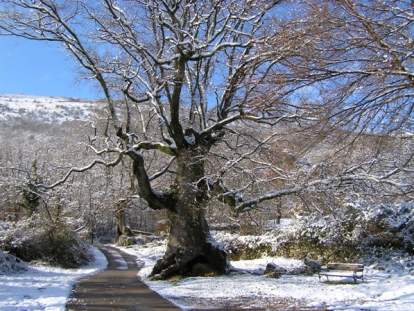 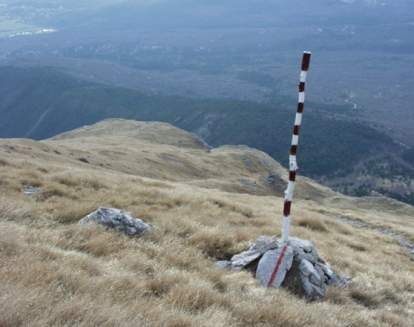 Winds are important in nature conservation because they
facilitate the survival of an array of rare, endemic species and associations
especially adapted to the local conditions of windswept areas, in particular,
the karst regions of islands and the coast. In fact, the Degenia velebetica
– one of our most important endemic plants – owes its existence, in its
only known habitat in our County, to the bura wind! This strong wind impedes
or renders impossible the succession of forest vegetation. It prevents
shrub and tree encroachment of grassy (Photo 1) and denuded petrophyllic
(rocky) habitats essential for the growth of endemic flora and vegetation.
Locations for erecting wind-power installations need to be carefully selected
because wind turbines tend to reduce the power of the wind in windswept
areas. Also, because their construction is often the direct cause of habitat
destruction, they adversely affect the range of typically localized and
rare associations found in windswept areas.

On the other hand, strong winds and storms often affect
protected natural assets. They are the cause of damage to old protected
tree specimens, protected forest parks, monuments of park architecture
and similar protected natural assets in which trees are the primary focus
of protection. Many times Public Institution “Priroda” has had
to deal with problems caused by strong winds. Despite great efforts to
mitigate or prevent possible damage from winds and storms, on several
occasions forceful winds have broken the branches and even almost the
entire crown of the old oak tree, a protected natural monument, at Sv.
Petar on Cres Island (see:
http://www.ju-priroda.hr/novosti.asp?id=novosti/12-saniran-stari-hrast.html
).

Strong winds and storms, frequently coupled with heavy
snowfall in recent years, have taken their toll on the protected parks
of Opatija. Together with “Parkovi” Opatija, we have been studying
which tree species are especially vulnerable to wind and storms. We have
found that in Opatija (as well as in Rijeka and the broader Kvarner region)
the most vulnerable are certain types of conifers, such as the cedar (Cedrus
spp.), the Arizona cypress (Cupressus arizonica var.) and the Aleppo pine
(Pinus halepensis). Of the deciduous trees, at least one old downy oak
(Quercus pubescens) collapses every year, particularly in Opatija. The
cause for that can sooner be found in the age of the trees, the presence
of parasitic fungi and/or poor growth conditions in a town setting rather
than in the vulnerability to wind of these resistance maritime trees.
In recent winters (with exceptionally windy periods and strong bura winds),
the author of this report has noticed an interesting phenomenon. Although
otherwise fairly resistant to wind, cedars have been known to break as
if made of glass when strong gusts of wind (in this case, gale-force “dark”
bura) are coupled to large amounts of rain.

People often call in to ask about the safety and stability
of trees around their houses and in public areas. We have to point out
that Public Institution “Priroda” does not employ experts who
could make such an assessment (nor is that our job). In similar cases,
where protected areas are concerned, we regularly seek out the help of
specialized institutions.

Photo 2. Protected oak tree at Sv. Petar on Cres Island before a part
of its crown broke off (Photo by Ivanka Jelenić) 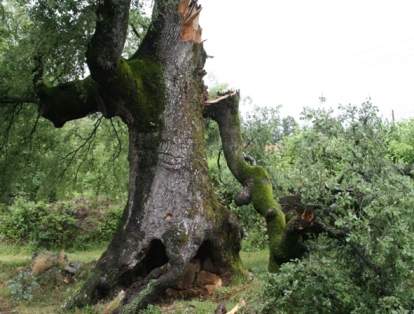