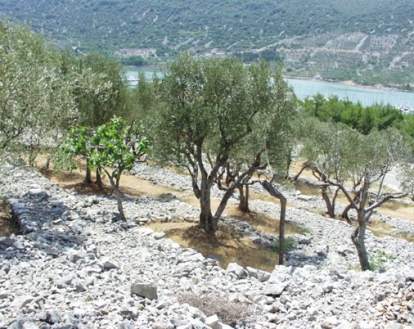 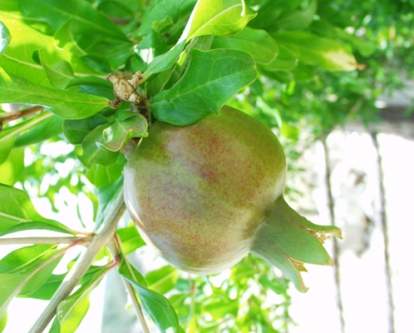 Photo 1. One of the forms of pomegranates on Cres Island (Photo by M.
Randić)

While gathering data about indigenous varieties and breeds
for the 2015 Novi List and INA calendar, we turned to Mira Radunić, Ph.D.,
of the Institute for Adriatic Crops and Karst Reclamation in Split, concerning
pomegranates growing on Cres Island. Because little is known of this variety
of pomegranate, we sent her for analysis a sample of the native pomegranate
from Cres Island, which was collected by Dino Fučić, our intern at P.I.
“Priroda”.

Today people largely associate the pomegranate with Mediterranean
countries. In many places here, it also grows semi-wild. The wild-growing
form of the pomegranate is a thorny shrub with bitter fruit, while cultivated
forms may grow into small, thornless trees and produce sweet or sourish
edible fruit (the edible and tasty part is the succulent casing around
the seeds from which juice can be pressed). The juice of wild pomegranate
can also be used and is considered to be have healing properties.

The origin and natural range of the pomegranate are not
completely clear. It is generally accepted that the pomegranate is one
of the oldest domesticated fruit species. Mostly it grows where olive
and fig trees grow. Several traditionally cultivated varieties of pomegranate
grow along the eastern Adriatic coast, the best known and most appreciated
being Konjski Zub, Slatki Barski, Ciparski and Pastrun.

The largest pomegranate-growing areas in Croatia can
be found in Neretva Valley, although pomegranates also grow everywhere
along the coast and on the Adriatic islands, in more or less scattered
small groups or alone. The pomegranate is wild-growing on Cres Island
to where it probably spread from the remnants of cultivated trees in the
past. For example, it can be found around Beli and in olive groves near
the Town of Cres. Mira Radunić, Ph.D., of the Institute for Adriatic Crops
and Karst Reclamation of Split is an expert on the native varieties of
pomegranate. We got in touch with her while writing about indigenous Croatia
varieties (we needed her expert opinion concerning a variety of pomegranate
from the Adriatic coast) and we happened to mention the pomegranates on
Cres Island. We have sent her samples and we will keep the readers of
our Web pages posted about any interesting facts we might learn.

The pomegranate is an unusually healthy fruit of high
nutritional value and rich in antioxidants. Its chemical composition includes
vitamins, sugars, polyphenols and mineral. The pomegranate can be recommended
as a medicinal fruit because of its antimicrobial, antiviral, anti-cancer
and anti-inflammatory (helps to reduce inflammation and fever) properties.
Oil made from its seeds is also used. The peel is rich in tannins and
helps in treating intestinal parasites and indigestion.

Dwarf varieties of pomegranates are prized in horticulture.
Lovely shrubs of dwarf pomegranate can be found, for example, in Ivan
Zajc Park in Rijeka. In several locations in Rijeka, the pomegranate grows
semi-wild or as an ornamental shrub. 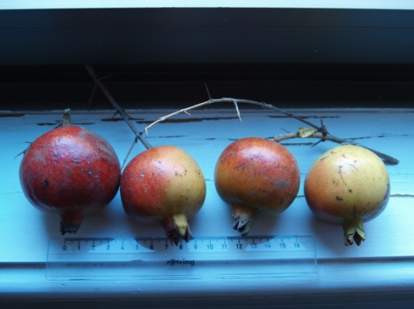 Photo 2. Samples of the fruit of semi-wild pomegranates from an olive
grove near the Town of Cres. (Photo by M. Randić)