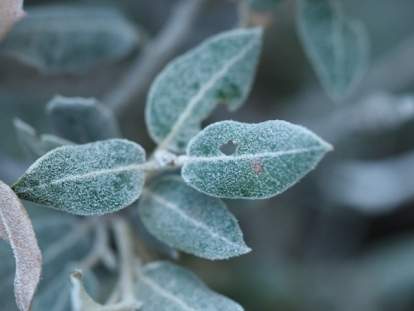 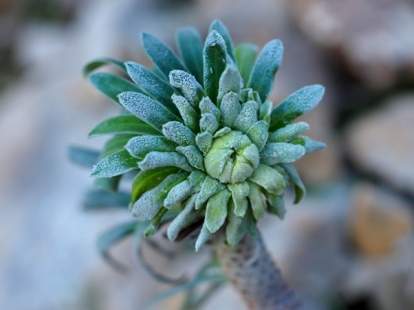 Photo 1. Salt sediment on the leaves of a Mediterranean spurge (Euphorbia
characias)

POSOLICA – SALT SEDIMENT ON THE SURFACE OF THE ISLAND

The day after gale-force bura winds hit the Adriatic
islands is the time for people to begin counting the damage done. The
most common victims of the powerful gusts of bura wind are roofless houses,
broken trees and sunken boats. Unlike the jugo wind blowing from the southeast
along the Adriatic coast and causing waves up to several metres high on
the open sea, the bura wind descends from the coastal mountains and, although
faster than the jugo wind, it generates much smaller waves. Nevertheless,
the force of the wind causes “sea smoke” to rise from the surface
of the frothy waves (Photo 2). The wind carries this sea smoke across
the islands, depositing it on vegetation, soil and buildings. This is
how posolica (salt sediment), a thin layer of tiny crystals of salt sea,
is formed. The intensity of the salt sediment is affected by the salinity
of the Adriatic Sea. With a salinity of 38‰, the Adriatic Sea falls in
the category of saltier seas (the average salinity of seas around the
world being 35‰).

The salt sediment accelerates the corrosion of metal
constructions and creates problems in power supply. It causes the rapid
decline of the isolation level of power lines and may result in outages
if the salt sediment is combined with fog, light rain or high humidity
in the air.

The salt sediment has an adverse effect on vegetation,
causing damage to leaves and blossoms. By increasing the osmotic values
of soil, it makes it difficult for plants to absorb the water they need.
Nevertheless, many plants have adjusted to such conditions. These plants
are called halophytes. By accumulating salt in their cells, halophytes
achieve osmotic values higher than those of the soil, allowing them to
absorb water easily. Other plants protect themselves against salt sediment
by developing a thick outer layer of cells, the surface of which can be
additionally protected by wax and hairs (Photo 3).

While posolica does make life on the islands more difficult,
it also has a use: since the distant past islanders have been using the
effect of posolica in meat and fish preservation (curing) (Photo 4). And
perhaps the lace-like structure of salt sediment served as an inspiration
for the design of Pag lace, produced on Pag Island where the bura wind
and posolica are felt the hardest (Photo 1).

Text and photographs by Patrik Krstinić 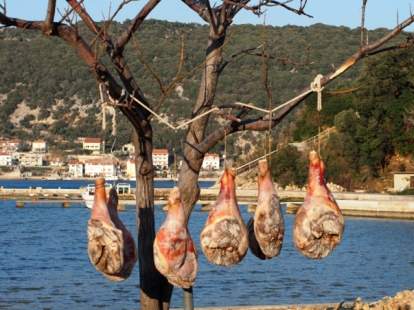