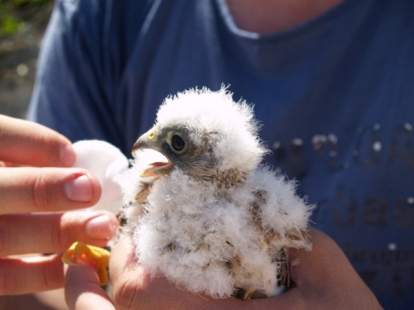 In 2010, the members of the Association BIOM discovered
a previously unknown colony of the species Falco naumanni (lesser kestrel)
on Rab Island. It was an exceptionally important discovery because this
critically endangered nesting bird was considered to be extinct in Croatia
for the past four decades. According to Bird Life International, the European
population of the lesser kestrel is steadily declining. For every decade
since 1950, the lesser kestrel population in Europe has dropped by 46%,
and it currently numbers between 25,000 and 42,000 pairs.

The lesser kestrel is very similar to the common kestrel
(Falco tinnunculus). Significant morphological differences are obvious
in the colour of the feathers of adult males. Unlike the male of the common
kestrel, the male of the lesser kestrel has a uniform rusty-red coloured
back with grey-blue “mirrors” on its upper wings. Differences
also exist in the behaviour and ecology of the two species. In contrast
to the common kestrel, the lesser kestrel is an exceptionally sociable
bird, feeding, nesting and migrating in flocks ranging from a dozen to
over a hundred birds. The lesser kestrel inhabits open warm, dry regions
(grasslands, steppes, deserts) and extensively cultivated lowland areas
with low-growing vegetation. It mostly feeds on insects but it will also
occasionally hunt small mammals, lizards and birds. The lesser kestrel
winters in sub-Sahara Africa and returns to our region only between April
and August to form pairs that nest and raise young.

The feeding areas frequented by the Rab population of
the lesser kestrel are the open rocky pastures of the south-eastern part
of the island where the ridge of Kamenjak Hill descends to form a gentle
plateau. Today rocky pastures in the Mediterranean can only be found in
areas where extensive animal husbandry is still practised, as for example
on Rab Island. Because no fertilizers or pesticides are used on these
pastures, they provide a haven for the threatened flora and fauna that
once were spread over a much larger range.

Since the discovery of the lesser kestrel population
on Rab Island, the Association BIOM has carried out an annual monitoring
and bird-ringing scheme at the beginning of July. Public Institution “Priroda”
took part in this year’s bird ringing. A total of 25 nests were discovered
and 12 chicks of different ages were ringed, ranging from baby birds only
a few days old to fledglings ready for their first flight. Data on the
phenology of the nesting and migration of the lesser kestrel indicate
that the condition of the Rab population is stable, which means that the
condition of the habitat where this species feeds and nests is favourable.
We hope that the number of lesser kestrels in Croatia will continue to
grow and that these nimble little predators will repopulate other areas
where they once nested.

Photos and text by Patrik Krstinić

Photo 2. Thirty-six days after hatching, the white down that covers the
chicks is completely replaced by adult feathers and the chicks are ready
to fly. 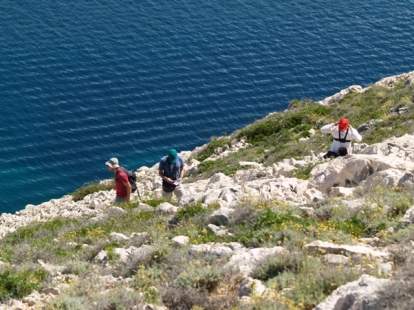 Photo 3. Rocky pastures are vital feeding and nesting areas for the lesser
kestrel. 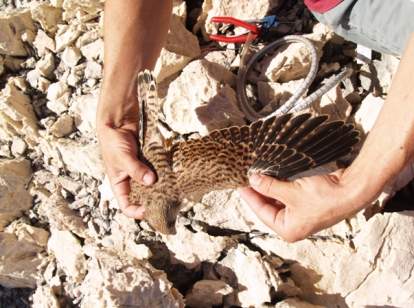 Photo 4. A ringed fledgling is ready for its first flight.