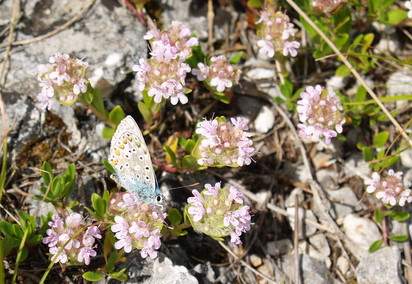 This year the time for lizard orchid monitoring coincided with the end of the blossoming of this rare orchid, which made spotting and counting the individual orchids in the field rather difficult. However, it did help us to discover yet another rare and interesting species that was in full bloom at that time: Thymus bracteosus Vis. ex Benth., a species of thyme, endemic to the Dinaride mountain range (Photo 1). Up till now this species of thyme has never been found in this part of the Croatian Littoral. The closest known site, recorded in the literature, is the one in the region of Zala Draga near Škrljevo, in the hinterland of Bakar. The plant was found by the well-known botanist Dragutin Hirc. In his book Revizija hrvatske flore [Review of Croatian Flora], he wrote “On July 7, 1881 I came upon it in Zala Draga near Bakar and, being a rare plant, I despatched it from this habitat to foreign botanists” (translated from Croatian). At that time it was common practice among botanists to send each other dried plant specimens. Botanists collected up to several hundred specimens to send to other botanists and/or exchange for other interesting plant material.

Even today, T. bracteosus still grows in the Škrljevo region, where I found it on a dolomite bald patch on an exceptionally bora wind-swept area of Vojsko Hill, within a Mediterranean-montane grassland. In that area neither the succession of forest vegetation nor black pine afforestation has taken such a strong hold as it has in other parts that are less exposed to the bora wind (and, consequently, covered in forest). Nevertheless, this species of thyme is very rare in the environs of Škrljevo and, being a potentially endangered species, the Nature Protection Act provides it strict protection.

Judging by the vegetation of the site near Meja and the extent to which the trunks of some woody species are bent, it is clear that this is another area exposed to the strong bora wind (Photo 2). 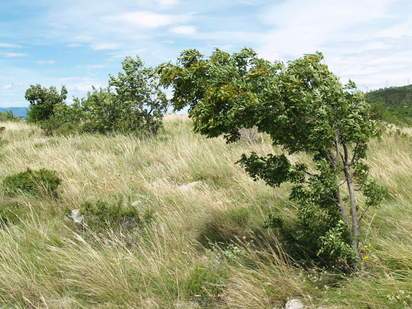 AREA EXPOSED TO STRONG BORA WIND IN THE HABITAT OF T. bracteosus  NEAR MEJA (PHOTO BY M. RANDIĆ)