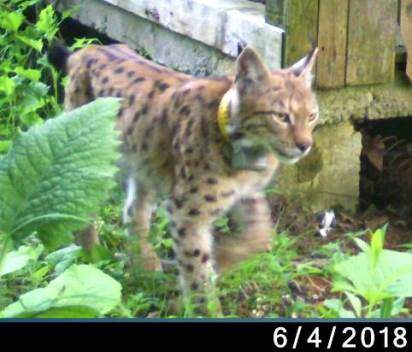 Marko ZiP the Lynx was caught in a cage trap on February 15, 2018 in the forests near Lič Polje and was fitted with a GPS tracking collar. This was the third lynx that had been caught and fitted with a tracking device as the result of collaboration between Public Institution “Priroda” and researchers of the Zagreb Faculty of Veterinary Medicine and the Polytechnic of Karlovac. The GPS collar was programmed to send data about the movements of the animal for a period of one year, after which time it would automatically drop off. Marko ZiP’s collar, however, stopped emitting a signal and no longer sent data on the animal’s whereabouts as early as April of this year, which left the reseachers and the “Priroda” employees in uneasy suspense. It was a huge relief, therefore, when the photographs taken by the camera traps, set up as part of the LIFE Lynx project, confirmed that Marko ZiP is still prowling the forests of Gorski Kotar.