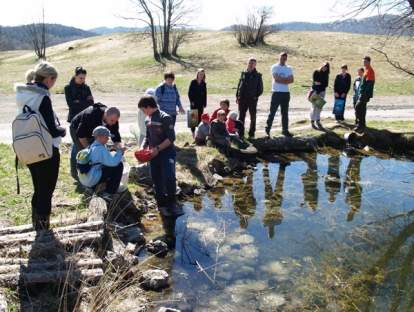 ENVIRONMENTAL AND EDUCATIONAL CAMPAIGN “THE BROWN FROG OF THE LOKVE REGION”

Two species of brown frogs live in the broader environs
of Lokve, as well as in other sites in Gorski Kotar. They are the brown
forest frog (Rana dalmatina) and the brown field frog (Rana temporaria).
In a way, both species have become the region’s symbol, reflected in traditional
tourist-oriented events (“Frog-jumping Night” and “Children’s
Frog-jumping Night”). Following old local tradition, the people of
Lokve would go frog hunting during the warm spring rains of March, which
coincide with the breeding season of brown frogs. Then, as now, frogs’
legs were a culinary specialty of Lokve. While only some 30 frogs were
caught at any one time in the past, in recent decades over-hunting has
reached mass proportions with hundreds of frogs being caught in a single
night, nearly destroying the frog population.

On the warm, sunny Saturday of 9 April, some ten pupils
of the Environmental Group of the “Rudolf Strohal” Elementary
School of Lokve, headed by teachers of nature study, biology and geography,
took part in an environmental and educational campaign entitled “The
Brown Frog of the Lokve Region”. They visited several important frog-breeding
sites in the Lokve area to learn more about the habitats of brown frogs
and to identify the micro locations of their breeding sites.

The participants made a list of breeding sites, marking
them on a topographic map using a GPS device. At each micro location,
they recorded data on the condition of the pond, its depth, vegetation,
temperature, likely pollution, the number of spawns, and other physical
and biological parameters.

All participants were delighted with the representatives
of amphibian fauna found at the breeding sites (brown frogs, toads, mountain
amphibians and small amphibians). They learned how to fill out a form
used in monitoring the state of amphibians in a given area, which is submitted
to the central database for amphibians at the State Institute for Nature
Protection.

Boris Crnković, a native of Lokve with excellent knowledge
of frogs in the Lokve region, spoke of the potential threats to brown
frogs. It was decided to monitor the development of frogs in the studied
ponds and to make the campaign a traditional event. Plans were also made
with the Lokve Forest Area Office of Hrvatske Šume (Croatian Forest Enterprise)
to deepen some of the ponds that dry out too early, making it impossible
for frogs to complete their development cycle from eggs to tadpoles to
small frogs. In this way, the ponds could hold fresh water for a longer
period, enabling the amphibians to finish their transformation cycle.
This campaign is one of the first in a series planned for the International
Year of Forests in which PI “Priroda” will take part together
with many other participants.

We would like to commend the diligent pupils of the Environmental
Group, Benjamin Bašić, Klaudia Boban, Andrej Jurčić, Domagoj Grgurić,
Ana Jakovac, Eva Bolf, MajduaTomljanović, Nina Vučković and Nadia Malnar,
as well as the group leaders, Mrs Vanju Maras Čeh, nature studies and
biology teacher, and Mrs Davorka Mihelčić, geography teacher, on their
earnestness in and commitment to studying and protecting brown frogs. 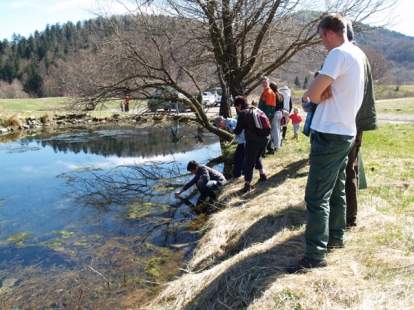 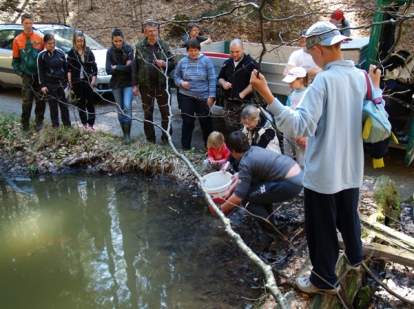 Photo. 3. Alongside a forest pond at Križ Potok