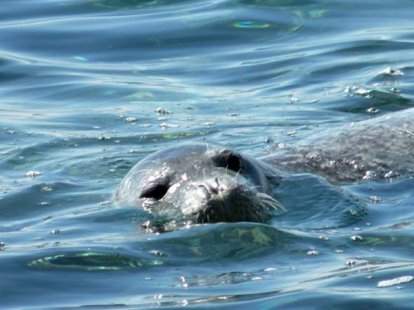 This has prompted greater efforts to be made in researching
the Mediterranean Monk Seal in the Adriatic. In the period from 18 March
2010 to 21 March 2011, the caves and habitats of the seal in the marine
area of Primorsko-Goranska County will be monitored and studied. Efforts
will include mapping habitats/caves, collecting data and photo-documentation,
as well as, educating people about this species. The Public Institution
“Priroda” has become involved in this campaign as part of the
project “Monitoring the Mediterranean Monk Seal” headed by the
Mediterranean Monk Seal Group, Association for Wildlife Research and Protection.
The first step will be the publication of a brochure for boaters, describing
endangered and protected marine and coastal species and listing rules
of conduct. One of the most captivating species in the brochure is the
Mediterranean Monk Seal.

What can we do to preserve the Mediterranean Monk Seal in the marine area of Primorsko-Goranska County?

Encountering a Mediterranean monk seal is an extraordinary
experience. How should we behave in such an occasion? Here are a few general
guidelines posted on the Web pages of the Croatian Ministry of Culture,
Directorate for Nature Protection (for detailed information, see link:
www.min-kulture.hr/default.aspx?id=5754):

Should you sight a Mediterranean Monk Seal while swimming
or diving, be sure to stay still and not to try approach the animal or
make any sudden moves that might disturb it or chase it away. Slowly and
calmly, swim as far away from the animal as you can.

It is prohibited to enter caves listed as potential
habitats and whelping sites of Mediterranean monk seals (competent Public
Institution to inform the public accordingly).
Should you encounter a Mediterranean monk seal while visiting other caves,
stay calm and do not make any sudden moves. Entering deeper into the cave
is not recommended as the seal could become upset and aggressive, especially
if it is a female with a pup. Head back towards the cave entrance, staying
close to the cave wall to prevent the seal from feeling trapped. In this
way, the cave entrance will remain free, enabling the seal to escape if
it feels threatened. Under no circumstances should you attempt to swim
or dive deeper into the cave.

Should you spot a Mediterranean monk seal on the seashore,
be sure to stay calm and not make sudden moves. The best thing to do is
find a hiding place from which to observe the animal. If a Mediterranean
monk seal is on land, this does not necessarily mean that it is in need
of human intervention. It could be an individual that is moulting or perhaps
in a deep sleep. If possible, take a photo of the animal and carefully
observe it to estimate it size and note its colour, behaviour and other
details relating to the encounter.

Pleasure rides in boats/motor boats are prohibited in
areas where there have been frequent sightings of Mediterranean monk seals
or where there could be a seal with a pup (competent Public Institution
to inform the public accordingly).

Should you spot a Mediterranean monk seal while riding
in a boat/motor boat, you should stop your vessel and wait until the animal
moves away.

– In all three cases listed above, you should seek to stay at least 50
metres away from the animal.;

– Should you witness anyone intentionally harassing a Mediterranean monk
seal, please report this to the Directorate for Nature Protection Inspection
and to the local police department.