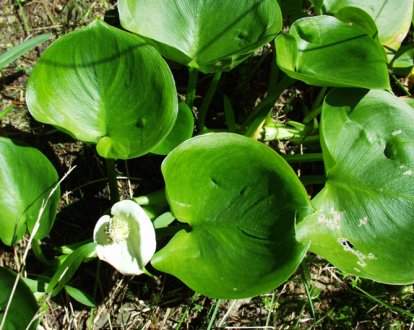 The Water Arum (Calla palustris) is a perennial plant.
In Croatia today, it can be found at only one, small locality in a forest
depression in Sungerski Lug in the Mrkopalj Municipality in Gorski Kotar
(Photo 1). In the past, the Water Arum was more widely spread across Croatia,
growing in a much larger number of sites.

Being a boreal (northern) species, the Water Arum requires
a specific habitat and specific microclimate conditions. Most likely due
to change resulting from current climate fluctuations and to increased
aridity in mountain areas during summer months, conditions in Croatia
no longer match the ecological requirements of this vulnerable species.
Another major cause for the disappearance of the Water Arum in a number
of previous localities in Croatia is urban development together with the
construction of electric-power and infrastructure facilities, and infrastructure
networks. It should be pointed that, today, these reasons make the reintroduction
of the Water Arum in previous or new (substitution) habitats highly unlikely
or almost impossible because of the lack of suitable ecological conditions
and/or suitable localities that could be potential substitution habitats.
This makes the need to provide protection measures to this species’ only
know locality in Sungerski Lug all the more pressing.

In addition to being the habitat of the Water Arum, this
locality has also been entered into Croatia’s National Ecological Network
because of the importance and value it has for the Primorsko-Goranska
County. As the habitat of an exceptionally rare and important plant, it
will also be included in the proposal that Croatia is preparing for the
EU European Ecological Network – NATURA 2000.

In 2009, biological research of the bog in which the
Water Arum grows was continued, and new biological data were gathered
about the bog and surrounding forest. A preliminary list was compiled
of plant and fungi species growing in the bog and its immediate environment.

On 3 December 2009, a clean-up of the bog was carried
out in which participated five representatives of the State Institute
for Nature Protection, one representative of the Faculty of Forestry of
Zagreb and three representatives of the Public Institution “Priroda”.
This is the second consecutive clean-up in which the Public Institution
“Priroda” has taken part (the first clean-up was carried out
in cooperation with the State Institute for Nature Protection in the fall
of 2008 on the fifth anniversary of the State Institute’s foundation).
The primary aim of this year’s clean-up was to remove the excess logs
piled up along the edge of the bog and to get rid of any branches that
threatened to fall into the Water Arum’s habitat or that high water could
sweep into the bog. Surrounding dry tree trunks, in particular of coniferous
trees, where cut down by chain saw, sawed up and removed to beyond the
impact area of the bog. 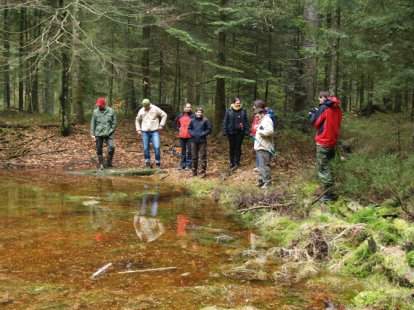 Photo. 2. Participants in the clean-up of the bog in Sungerski lug on
3 December 2009 (Photo by M. Randić)