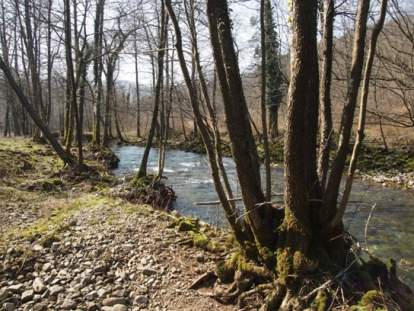 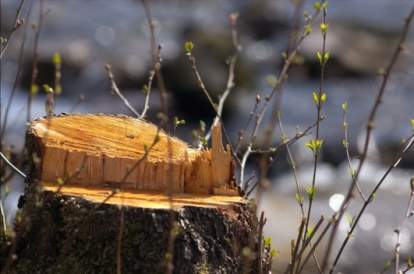 Photo 1. Stump of a freshly cut black alder tree on the banks of Rječina
River (Photo by Dinko Dorčić)

Special types of forests called gallery forests often
grow along riverbanks. These forests are made up of tree species that
mostly do not extend far from the rivers. They form narrow strips on both
sides of a river and stretch only as far as the effect of the river is
felt. This was the case with Rječina River. Even today along its banks
we can still find the last “remnants of remnants” of gallery
forests (Photo 4), in which the black alder (Alnus glutinosa) is a major
tree species.

Today, most of the gallery forests along the Rječina
have been cut down, destroyed and uprooted. What little is left of alder
trees and other typical gallery trees and shrubs in exposed to various
threats (Photo 1). On the roots of a black alder tree that was toppled
over by gale-force bora winds last winter we discovered interesting round
clusters of lumps, known as nodules, which contain special symbiotic bacteria
called actinomycetes. These lumps, and the actinomycetes of the genus
Frankia in them, play an unusually important role in fixing nitrogen (N2)
and enriching the soil with nitrogen. In this way, these beneficial symbionts
facilitate the life of trees to which they are attached and in exchange
they receive organic nutrients from the trees.

The nodule clusters on the alder tree roots are of a
typical (semi)spherical shape; they branch extensively and have numerous
enlarged endings, like a coral (Photo 2). Along the course of Rječina
River, they are often visible on alder tree roots from which the swollen
waters of the river have carried away layers of sandy soil (Photo 3).
During our visit, we came across nodules the size of ping pong balls,
although, according to the literature, they can grow to the size of tennis
balls.

Also according to the literature, actinomycetes (of the
genus Frankia) can form nodules on the roots of trees and shrubs from
the genera Casuarina, Ceanotus, Coriaria, Eleagnus and Myrica, as well,
– that is, mainly on trees and shrubs growing in nitrogen-poor soils.
There is also another important group of nitrogen-fixing bacteria (not
related to the actinomycetes of the genus Frankia mentioned here) that
form small nodules on the roots of plants of the legume family. That type
of nitrogen fixation is better known and children learn about it in elementary
school. However, that’s a different “story” which we might tell
some other time. 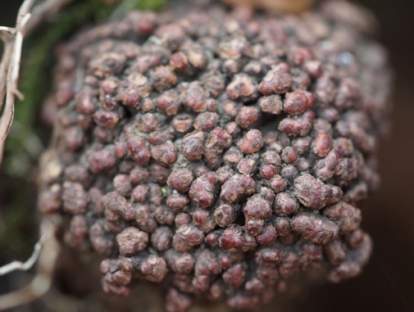 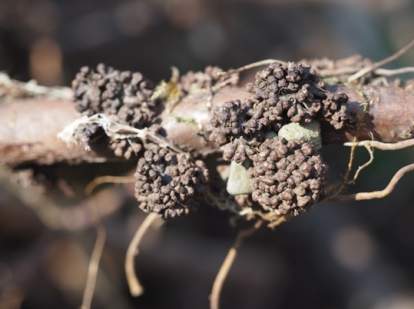 Photo 4. The remnants of gallery forests of black alder along the bed
of Rječina River (Photo by Sunčica Strišković)

Acknowledgement: We would like to express our thanks
to Mr Dinko Dorčić, an experienced nature photographer, for the impressive
photo of the stump of a freshly felled alder tree on the banks of Rječina
River.