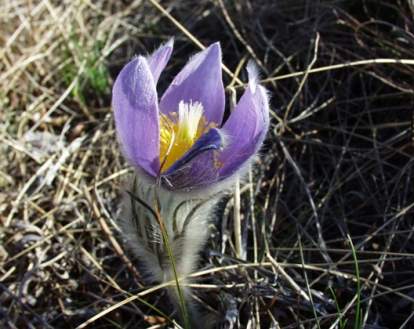 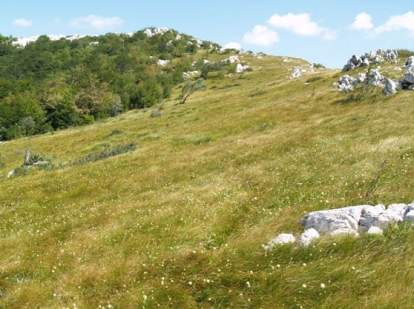 Photo 1. Typical habitat of the association Campanulo marchesettii-Seslerietum
prov. on a mountain ridge exposed to the bura wind beneath Mali Platak
(Photo by M. Randić)

GRASSLAND ON THE BURNJAKS OF GROBNIK MOUNTAINS
(Presentation Abstract)

On Mount Obruč and other mountains that rise above Grobnik
Plain there are numerous sites on which the frequent bura wind is a prevailing
environmental factor. Such a (micro) location is referred to as a burnjak
by locals. In fact, there is an area called Burnjak on the path to the
Hahlić mountain lodge on Mount Obruč. The grasslands on burnjaks are characterized
by the richness and distinctive features of plant and animal life, especially
by the narrow-leafed moor grass (Sesleria tenuifolia Schrad. s. l., syn.
S. juncifolia). This grass covers large areas on the seaside slopes of
Mount Obruč and surrounding mountains. In the broader Kvarner region,
these grasslands are known for their uniform appearance due to dense hillocks
of moor grass (called trava iglenac* in the Grobnik dialect). Once these
grasslands were considered valuable pastures for sheep but today they
have mostly been left to shrub and tree encroachment.

According to conventional botany and vegetation science
(Horvat 1962), there are typically three types of grassland vegetation
in which moor grass prevails. These are the plant communities or associations
Genisto-Caricetum mucronatae, Carici-Centauretum rupestris subas. seslerietosum
and Saturejo-Edraenthetum.

Studying these associations in the mountains surrounding
Grobnik Plain, as well as in the broader Kvarner region, we have come
to the conclusion that it would be more appropriate to separate grassland
associations in which moor grass prevails and which are typical for burnjaks
from the association Carici-Centauretum rupestris (growing in habitats
less exposed to the bura wind) and place them in a special group of associations
that we have, for the time being, named Seslerietum juncifoliae s. l.
(Cf. Randić 2007).

Up to date only two associations, which could fall into
this specific “group” of associations of karst grasslands on
burnjaks, have been described. These are the association Genisto sericeae-Seslerietum
juncifoliae in the Slovenian region of Kras and the association Bromo-Seslerietum
interruptae on Krk Island. Due to considerable sea-level, environmental
and floristic differences within this “group” of associations,
we believe it deserves to be further divided in terms of plant ecology.
As one of the possibly more important representatives of this “group”
of associations, in particular in the higher and colder mountain regions
of the Rijeka hinterland, we can single out the previously undescribed
association Campanulo marchesetti-Seslerietum juncifoliae prov. (Randić
2007: Table 11, Cf. especially images no. 206, 21, 215 and 216). In addition
to the prevailing moor grass, the typical species in this association
are the Marchesetti bellflower (Campanula marchesetti Witasek), Allium
ericetorum Thore, the widow flower (Knautia sp.) and other characteristic
plants.

The association Genisto-Caricetum mucronatae grows on
the most exposed and windswept areas. It spreads from the slopes of Pliševica
Hill near Klana, across Mount Obruč and the exposed hillsides of Mudne
Doli up to Mali Platak and Bogdin ridge (Randić et al. 2013). This association
is exceptionally valuable with regard to the protection of rare and endemic
species that are important at the European level (NATURA 2000 species).
At the foot of Mount Obruč in the Zad Sten/Brgudac area, we discovered
stands of this association growing at unusually low heights above sea
level. They have a particular botanical composition (mountain plants and
black bogrush or Schoenus nigricans L.). Because such communities have
not been described in botanical science up till now, we propose the classification
of a special sub-association Genisto-Caricetum mucronatae subass. schoenetosum
nigricantis (Randić 2007: Table 10, images 183 and 199). The ecology of
this association is unusually interesting and probably coincides in part
with the ecology of the association Danthonio-Scorzoneretum villosae subass.
schoenetosum nigricantis of the Kvarner islands of Krk and Cres.

The third association, Saturejo-Edraenathetum, is a typical
association of lower heights. For example, it grows on the windswept areas
of Grobnik Plain. Narrowed-leaved moor grass occasionally prevails in
the botanical composition of this association.

*We would like to thank Mr Mladen Superina of Dražice for calling our
attention to the popular name of moor grass.

Photo 2. The greater pasque flower (Pulsatilla grandis), a rare species,
grows in some communities of grassland with moor grass in windswept areas
exposed to the bura wind (Photo by M. Randić) 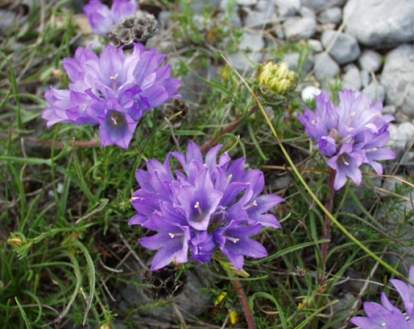