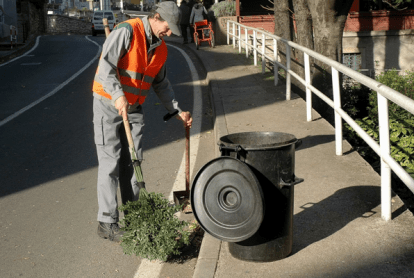 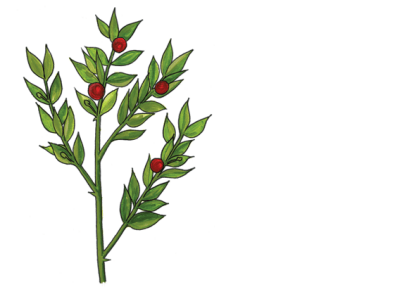 Photo 1. The butcher’s broom is this year’s plant motif on the Christmas
and New Year cards of the Town of Opatija (coloured drawing by Nikola
Tojaga, P.I. “Priroda” associate)

THE BUTCHER’S BROOM IN THE LIBURNIA REGION

The butcher’s broom (Ruscus aculeatus) is an evergreen
shrub that often grows in dense clusters in littoral forests. It is abundant
in our protected forests at Glavotok on Krk Island and on Košljun Islet
and in some areas of the Ecologcial Network Natura 2000. When visiting
these forests, we often have to work our way through thickets of butcher’s
broom, an experience that is not easily forgotten because the spiky tips
of the plant’s stiff, leathery false leaves (phylloclades) prick our legs,
even through clothing. The stems and false leaves of the butcher’s broom
are nevertheless very ornamental and many plants are cut for use as decoration
in floral arrangements. The dark-red berries that remain on the phylloclades
throughout the winter make the plant especially appealing.

For those of you who have not (yet) come across this
spiky shrub but would like to see and learn more about it, we suggest
you visit the old, picturesque hill-top hamlet of Veprinac above Opatija.
The surrounding forests abound in butcher’s broom, growing in huge clusters
that are hard to miss, and the hamlet was in all likelihood named after
the decorative plant (butcher’s broom = veprina)

The butcher’s broom has always been valued as a medicinal
plant and modern science has managed to isolate many useful medicinal
substances from it, as for example, ruscogenin and neuroruscogenin (=steroidal
sapogenin) which are concentrated in the shoots of the plant. Since the
distance past, butcher’s broom has served as an effective diuretic.

There is also an interesting ethnobotanical fact linked
to the butcher’s broom, especially in the Liburnia region. While the brooms
of street sweepers in the County are made of thin branches of either black
alder (in the littoral) or birch (on the “continent”), in the
Liburnia region (Lovran, Opatija) the “trade mark” of street
sweepers is a broom made of butcher’s broom branches (Photo 2). For several
years now, P.I. “Priroda” has been involved in helping the Town
of Opatija select typical plant motifs for its annual Christmas and New
Year cards. The butcher’s broom has been selected as this year’s plant
motif.

Photo 2. The “trade mark” of street sweepers in the Liburnia
region is a broom made of the shoots of the butcher’s broom (Ruscus aculeatus).
(Photo by Jerko Gudac, photographer-associate of P.I. “Priroda”)