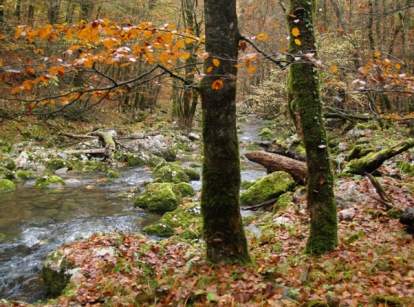 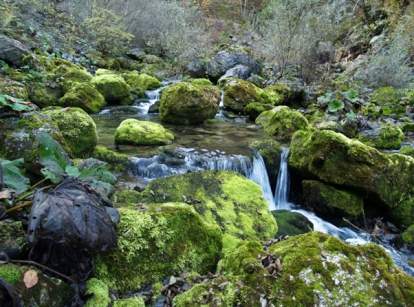 The aquatic world of the rivers, brooks and creeks of
Gorski Kotar has distinctive features and boasts unusually appealing landscapes.
Kupa River is a gem of highland nature. Its natural assets are particularly
well-preserved in Velika Belica and Mala Belica, its two short but water-rich
tributaries (especially in times of heavy rainfall/high underground karst
waters from the hinterland carbonate rocks of Mt Risnjak and Dragomalj)

Velika Belica and Mala Belica are two well-preserved,
picturesque and, in terms of geomorphology, interesting dales of tributaries
that join the Kupa River at Kuželj (Velika Belica) and Guče Selo (Mala
Belica). Both tributaries have karst springs that are copious during high
waters, and their plant and animal life is also special. The surrounding
rocky ledges at the foot of Dragomalj are rife with petrophylic biocenosis
(rocky slope communities) containing many rare species : www.ju-priroda.hr/zanimljivosti.asp?id=2zanimljivosti/priroda/1-botanicke-zanimljivosti.html).
). Our only “forest antelopes” – chamois – like to come here to graze
on the abundant and diverse mountain plants growing on the rocks. Life
in the forest is a mixture of lowland, highland and mountain species.

The aquatic habitats of these preserved and pure highland
watercourses with bountiful springs are also exceptionally interesting.
As the water shoots over cascades and moss-covered rocks it becomes rich
in oxygen, making it the perfect home for invertebrates – such as stoneflies,
caddisflies, mayflies and snails – that can be rarely found today in other
aquatic regions. In the lower course of Mala Belica there was once a mire
area covered in the vegetation of flat basophilic mires. Today the mire
is mostly overgrown. However, for now we do not have enough information
regarding the extent of encroachment. In the lowest part not far from
Guče Selo, parts of the mire have been drained and are used for agriculture.
Considering that both areas are listed in the NATURA 2000 Ecological Network,
it would be necessary to assess the present condition of the areas, conducted
research and prescribe protection measures to ensure that their landscape
and natural assets, spring zones, watercourses, and rich animal and plant
life, remain in as pristine a state as possible.

Photo 2. Surrounded by lush forest, the upper course of Mala Belica flows
through a narrow canyon. (Photo by M. Randić)