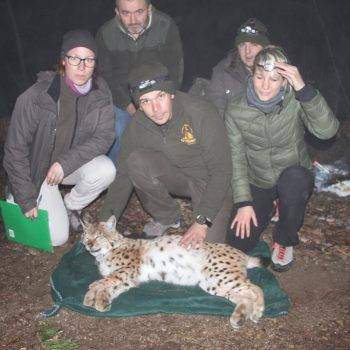 As part of the EU-funded Carnivora Dinarica project, a young female lynx, estimated to be two years old and weighing 16 kg, was caught in a cage trap in the hinterland of Klana. The lynx walked into the trap on March 7, 2019 at 22 minutes after midnight. After the animal was processed, it was fitted with a GPS tracking collar that will monitor its movements for a period of one year, after which time it will automatic fall off. The female lynx was given the name Andrea. Considering that it was caught not far from the border with Slovenia, it will be interesting to see on which side of the border the lynx will spend more time. After recovering from narcosis, Andrea quickly disappeared into the darkness of the highland forest. Good luck, Andrea!